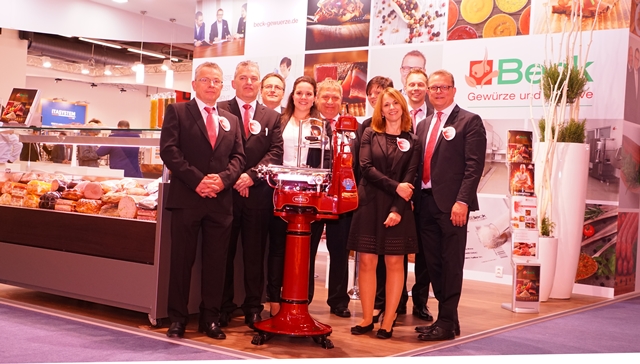 In the year 2016 the company Beck spices and additives looks back on a successful IFFA.

In personal conversations existing business relationships were consolidated and a large number of new contacts in the butchery and meat industry sectors were established worldwide.
For the company Beck personal contact with the customer and close cooperation with individual advice and technological support are of particular importance.
The novelties, spices and ingredients presented at the exhibition stand could be tasted and discussed on site directly at the counter on the basis of a large number of finished products, which were produced at the in-house technical center.
The new products from the Beck Bavarian BBQ range - Pulled Pork, Beef Brisket and Pulled Poultry - were very well received. The company was also able to inspire many international customers with the newly presented SoftFix marinade range "Culinary World Tour" for the barbecue season 2016.

Due to the increasing demand in the field of BIO products, the Beck BIO assortment was extended so that the new BIO barbecue spices could be presented especially.
In the field of raw cured meat products, interesting slicer products, such as bacon, as well as for the butchery industry, were used by the meat industry high-quality products, such as long-term matured bone ham, presented.
On the basis of Kochkökelprodukten, such as ham, farmer's ham or nut smoked ham could be various declaratory friendly Kochpökelpräparate be advertised.
Thus, the new starter culture "MicroStart NoPor plus" and its mode of action could be demonstrated: the suppression of bacterial fermentation holes and an optimized reddening.
The company Beck spices and additives thanks all trade visitors for the interest in the company and the presented products.

We look forward to seeing you again at the IFFA 2019!